The periodic meeting of CEN TC 128 SC3 was held on 6 October.

This is the periodic meeting of the technical group (committee) set up at European level with the aim of carrying out regulatory activities in the sector of brick products for discontinuous roofing membranes. The group includes delegates from the member states, operating in public or private research centers and with specific experience in the field. Coordinator of the group is Eng. Henry Mathieu of the CNSBT (F). Italy was represented by Prof. Marco D’Orazio, current coordinator of the UNI / CT 033 / GL 15 (Discontinuous roofing) group. The works covered various themes. The technical group addressed the issue relating to the current situation of the CPR and the repercussions on the specific regulatory activity for the roofing sector, as well as the actions that the EU Commission intends to take to speed up the regulatory production process. The issue of Brexit and the ways in which the UK is preparing to manage the exit from the EU was then addressed and how the mutual recognition of certifications will be conducted for the products that will be certified in the future. For products already CE marked, recognition is already in force, as a mutual recognition mechanism is envisaged with the adoption by the UK of the CEN standards in force. A discussion has also begun on how to manage, in terms of technical standardization, the issue of the circular economy in construction and in particular for roofing. The progress of the LIFE UE SUPERHERO project was also presented during the meeting. The project involves research centers, universities, large industrial groups, administrations and producer associations and is coordinated by the Centro Ceramico di Bologna, in the figure of Dr. Giuliana Bonvicini. The Polytechnic University of Marche, ICP, Terreal, Confindustria Ceramica – Laterizi, ACER Reggio Emilia and the Municipality of Reggio Emilia participate in the project in Italy. The project aims to promote, also through specific regulatory instruments, the use of innovative tiles (HEROTILE), geometrically optimized to reduce, thanks to the greater ventilation under the skin, the amount of heat transmitted to the internal environments and, indirectly, also positive effects on the heat island phenomenon, thanks to the reduction of the need for air conditioning in the attic rooms. During the meeting, evidence was given of the conclusion of the first experimental phase, with the survey of user behavior in ten lodgings, with flat roofing, prior to the installation of the HEROTILE tiles (name of the LIFE UE project which determined the development). Specifically, evidence was given of the monitoring of the environmental conditions of the dwellings, as well as of the actions implemented by them in response to the particularly severe thermal stresses of the attic rooms with flat roofs. Evidence was also given of the next planned activities, consisting in the realization in three laboratories (Centro Ceramico, CNSBT, Polytechnic University of Marche) of experimental devices useful for the characterization of the tiles in terms of air permeability, due to the positive effects already found on the thermal performance of the roof covering with HEROTILE tiles. The presence of a ventilation chamber under the roof, optimized in terms of performance, thanks to the HEROTILE tiles, in fact, allows to obtain advantages that are very similar to that of cool-roofs, based instead on the use of highly reflective materials. The devices will be used for a round-robin test. 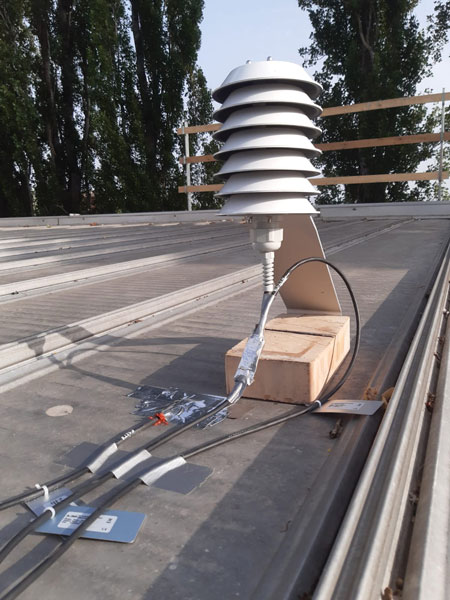 Temperature and relative humidity probes were installed on the flat roof, before Herotile installation 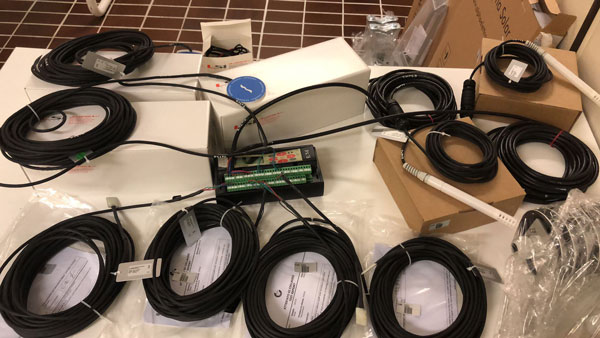 Temperature, relavite humidity sensors and flux meters before the installation on the roof

This website uses cookies to improve your experience while you navigate through the website. Out of these cookies, the cookies that are categorized as necessary are stored on your browser as they are essential for the working of basic functionalities of the website. We also use third-party cookies that help us analyze and understand how you use this website. These cookies will be stored in your browser only with your consent. You also have the option to opt-out of these cookies. But opting out of some of these cookies may have an effect on your browsing experience.
Necessary Always Enabled
Necessary cookies are absolutely essential for the website to function properly. This category only includes cookies that ensures basic functionalities and security features of the website. These cookies do not store any personal information.
Non-necessary
Any cookies that may not be particularly necessary for the website to function and is used specifically to collect user personal data via analytics, ads, other embedded contents are termed as non-necessary cookies. It is mandatory to procure user consent prior to running these cookies on your website.
SAVE & ACCEPT
Go to Top